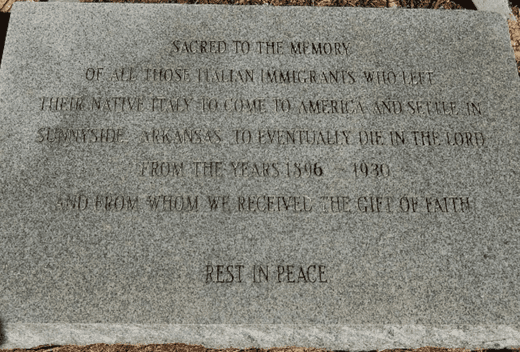 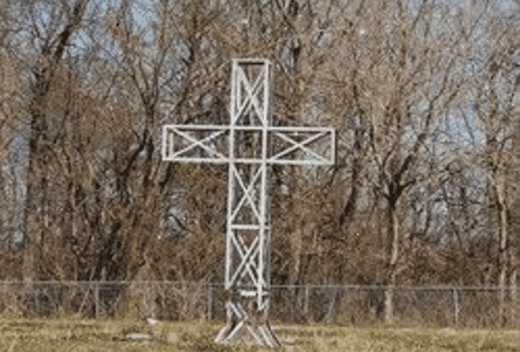 HYNER CEMETERY WHERE ITALIAN IMMIGRANTSFROM ITALY TO SUNNYSIDE WERE BURIED

HYNER CEMETERY: A TRIBUTE TO THE FAITHFUL

At Hyner, a portion of Sunnyside Plantation, owned by Austin Corbin, over 125 Italian immigrants died and were buried in the first year at its plantation cemetery, named Hyner. Many who are interred here died of malaria.

Sadly, there are only a handful of stones left, most of them badly damaged.

It is sacred to the memory of their descendants that all those Italians who left native Italy to come to America and settle in Sunnyside, Arkansas to eventually die in the Lord from beginning in the year 1896 and from whom we have received the gift of faith that we record the known deaths and hope to find or hear of more.

The following information of Italian deaths are substantiated and found beginning with files of Ernesto Milani. Four deaths occurred on the ship Chateau Iquem in November 1895 and buried at sea. 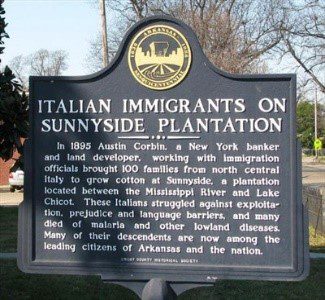 KNOWN ITALIANS BURIED @ HYNER IN THE EARLY YEARS 1895-1897- ETC.
Documentation by Oldrini, chief agent at Ellis Island to Ambassador Fava, on March 15,1897 reported in the first year of 1896 there had been 25 births and 23 deaths (10 adults and 13 infants and children.
Adding to the above, the following list of 1897 deaths was found by Dr. Edward Stibili in the archives of the Italian Foreign Ministry, Vatican archives and files from the archives of the diocese of Little Rock.

The total deaths of that year amounted to 53. As this list only contains 34, we believe (19) must be infants born here and died afterward of which I have no record. Signed: Victor Alpini
In November of 1897, Father Bandini submitted a report that there were 16 additional deaths on Sunnyside thus the list buried came to 72.

during Sunnyside investigation wrote the five (5) following she had witnessed.

Should anyone reading this list of known deaths at Sunnyside have any relatives that you know or have been
told of please contact Libby Borgognoni, 870-265-1457 so they may be added to the current list.