The Biography of Saint Isidore, the Farmer

Considered the patron of farmers, peasants, day laborers, and rural communities, Isidore was born to very poor yet very pious Catholic parents in Madrid, Spain. His parents were unable to support him when he was a youth and sent him to work for a wealthy landowner, John de Vergas (he ended up working for him for the rest of his life). He married a very religious woman named Maria Torribia (also known as Maria de la Cabeza). She, like Isidore, became a saint. They had one son who died unexpectedly as a child. Their grief inclined them to believe their son's death to be a sign from God and consequently vowed to live a life of perfect continence.

Isidore frequented Holy Mass every morning but often reported to work late. Late, though he was, his plowing was nevertheless accomplished by angels that resulted in three times more productivity. His coworkers and his boss witnessed such miraculous events and accorded Isidore with great respect. St. Isidore loved the poor and loved the animals. The miracle of the multiplication of food occurred when Isidore fed a flock of starving birds and on another time when Isidore shared his food with a large group of beggars. Isidore died on May 15, 1120 at 60 years of age and was canonized in 1622 along with four very notable Spanish saints. The group, known as “the five saints,” included St. Ignatius of Loyola, St. Teresa of Avila, St. Francis Xavier, St. Phillip Neri, and St. Isidore. His body has been found incorrupt. His memorial is celebrated on May 15 on the Roman calendar. 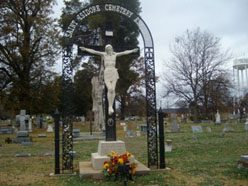 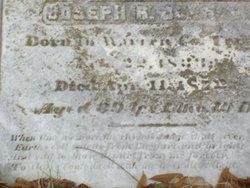 Joseph Berthram Johnson was converted to Catholicism —the beloved faith of his wife in 1869. He nicked himself while shaving and blood poisoning set in. A few days later, he died on April 11, 1872, at the young age of 39 and was the first member to be buried in the cemetery of the little church that through the efforts and his undying devotion to his wife culminated in the reality of a Catholic Church in Lake Village.

Joseph was buried in a brick tomb constructed above ground in accordance with New Orleans traditions on the banks of Lake Chicot. The erosion of the lake bank caused problems and in 1910, his tomb had deteriorated so badly his remains were reinterred to the present location at the Saint Isidore Cemetery.

During the 1920s, the parish priest buried four paupers across the foot of Johnson’s lot and their attorneys worked on an agreement that the remaining three unused spaces would be reserved for the Johnson’s heirs. This did not happen, but each year, a donation was made in November until 1935 for the upkeep of the lot. Several years later, four corners of their grave space were laid with grey granite posts with the “J” initial and remain there today.